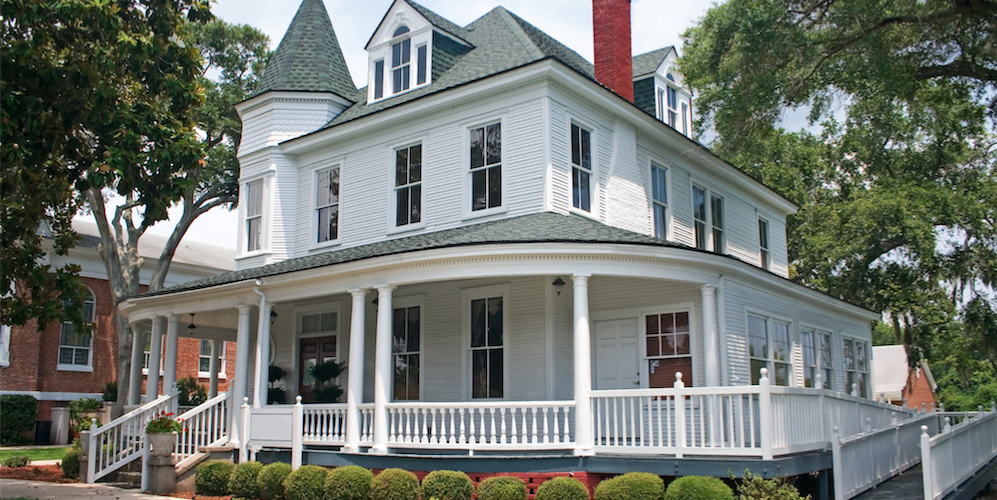 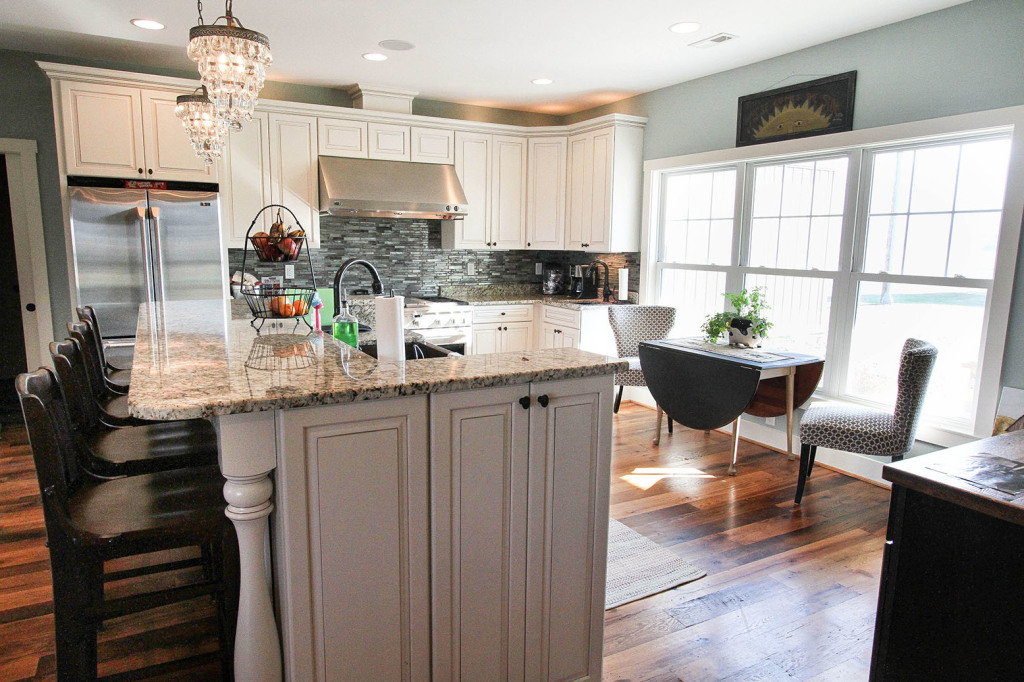 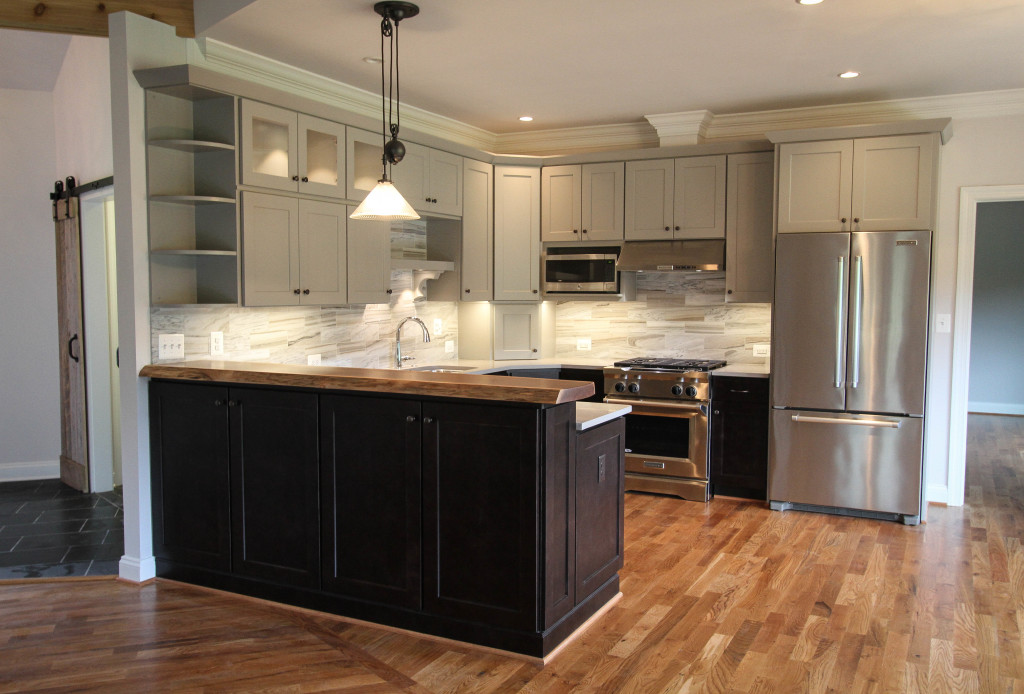 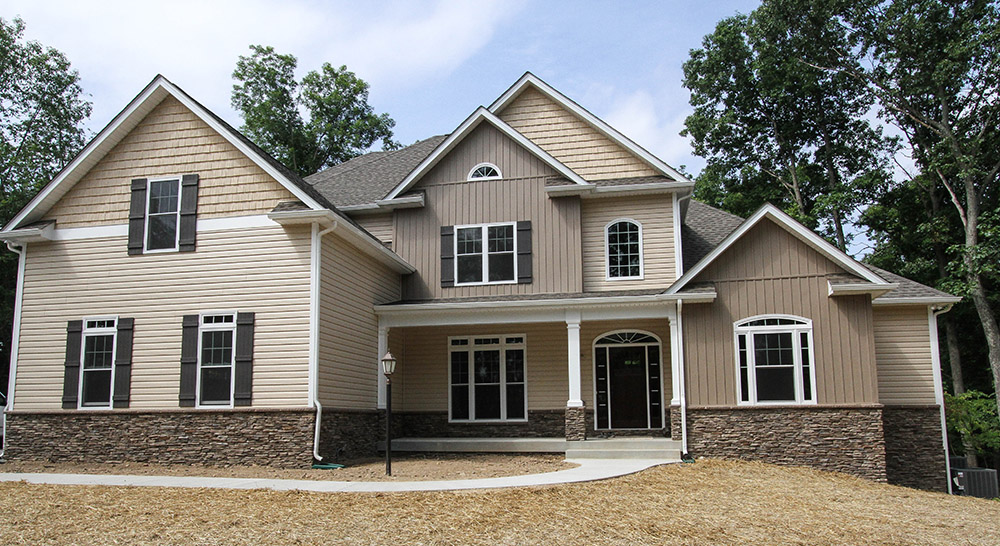 Save Your SearchRefine Search

Somerville, known to some as the “little brother” to Cambridge, is one of Boston metro’s most desirable areas, due to its energetic “squares”: Davis Square, Ball Square and Powderhouse Squares – where students mingle with professionals in a lively arts and active retail setting, Union Square, Spring Hill, and East Somerville, where cultural activity meets an ever growing new population and amenities. Somerville has a flavor all its own, is easily accessible to Boston via the T, bike lanes and walkable streets.

A recent and ever-growing development boom, including residential and "lifestyle" shopping center at Assembly Row, is keeping Somerville at the top of buyers' lists of areas in demand. Somerville's eclectic population is the reason that in June 2015, the National Civic League named the City of Somerville one of ten national winners of its annual All-America City Awards, making it the third time in the City's history that Somerville has won the award since its inception in 1949.

Contact us to schedule a showing, or if you have any questions. Create an account to save favorite properties and receive email notifications when similar listings come on the market. 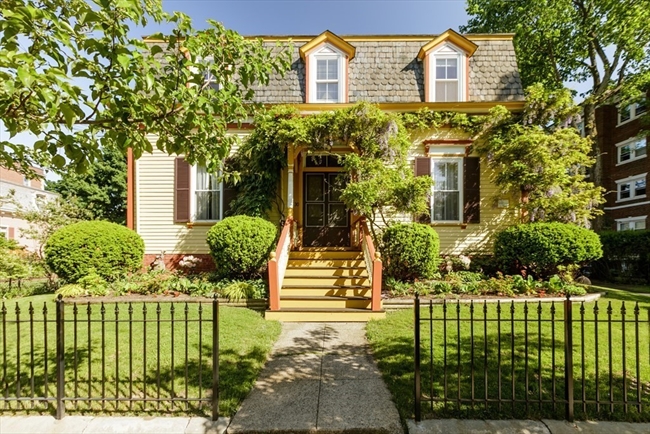 Available for only the 3rd time in 152 yrs, the wisteria-adorned Eliza Stebbins House (c.1870) is like no other in Somerville. Set on a lg lot steps from the ctr of Davis Sq, the historic Mansard home and gardens have been lovingly restored and updated w/CA. Classic double doors open to foyer w/high ceilings, ctr stairwell, wd fls. On left, DR has ceiling medallion w/chandelier, decorative marble fp, crown molding, sconces. Beyond it, kitchen features wide pine fls; china cabinet; 5-burner gas cooktop; 2 ovens; vent hood; stone counters and backsplash; pendant, recessed, and undercabinet lights; and french doors to the expansive rear deck. To right of the foyer lies the LR w/gas fp; adjoining it is a roomy ensuite BR. At the rear of the house is a conservatory w/2 sets of doors to the deck; mudroom; w/d; ½ bath; backstair. Upstairs are 4 bedrooms (1 w/ensuite spa bath) and 3rd full bath. Lower level 1-BR apt can be rented or incorporated into main house. Landscaped, fenced yd off drvwy 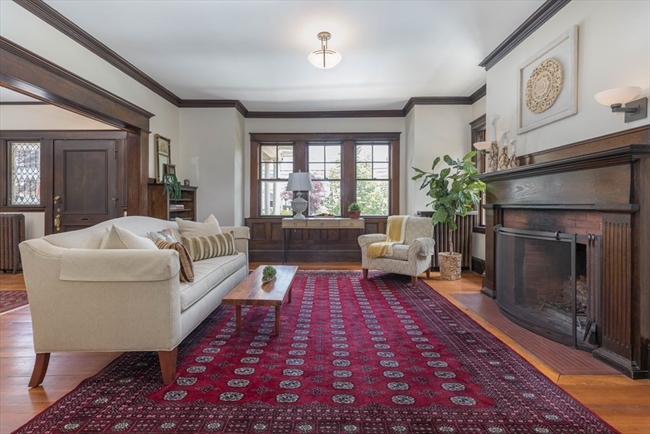 A ONCE in a LIFE TIME opportunity! This grand home with an incredible wrap around porch has been meticulously restored/maintained by the owner. With about 3600 sq ft, 7 bedroom, 2 full, 2 half bathrooms, hardwood floors, high ceilings, double pantry, incredible woodwork and historic details. Unfinished basement with HIGH ceilings too!

Listed by April Bradshaw of Compass 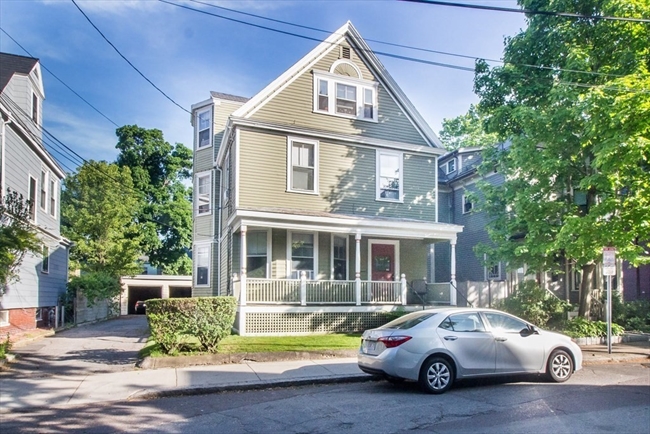 Across from Seven Hills Park and the Davis Sq. T station, this rambling Queen Anne would convert easily back to its original glory as a grand single family home. It currently comprises 4 units (1 studio, 3 one-bdrm) on a large lot w/long driveway and 4 garage bays. The wide front porch opens into the gracious foyer w/staircase and stained glass window. Unit 1 occupies the rest of the 1st floor and has one finished room in the bsmt and w/d in unit. Units 2 and 3 make up the second floor. Unit 2 has a private deck facing the rear. Unit 3, facing the street, is a bright studio. Unit 4 spans the entire top floor w/lovely views. Common laundry and washroom in basement as well as storage and utility rooms. Well maintained by same owner for 40 yrs: new boiler installed 2018; new HW tank 2021; regular roof maintenance. From this residential enclave, stroll to the delights of Davis Sq., No. Cambridge, and Porter Sq. Easy commute by foot, bike, or public transit to Harvard, MIT, and Tufts. 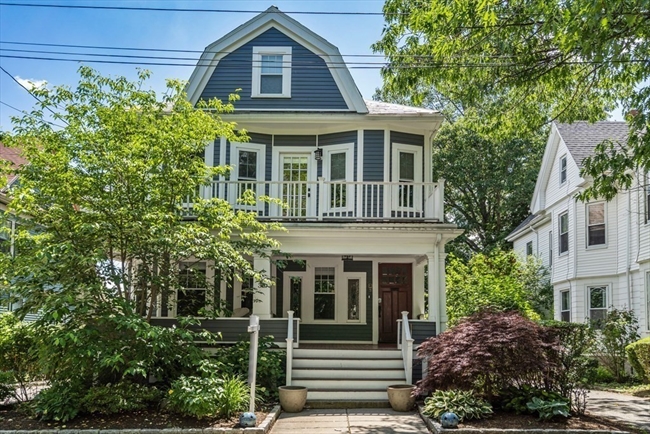 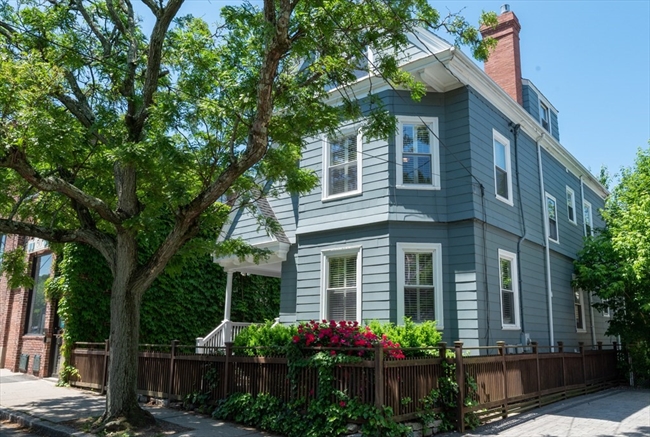 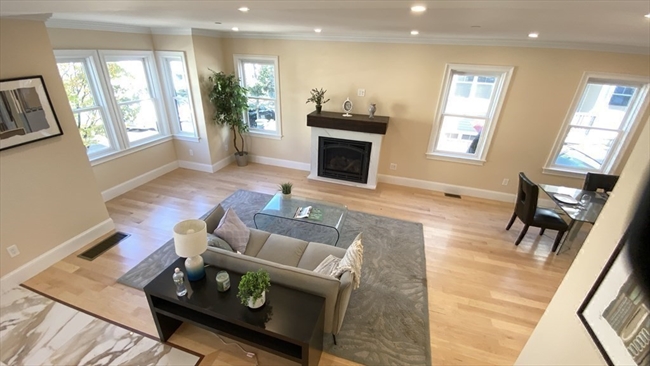 Located near new Greenline and within walking distance to the Redline& bike path, make this an ideal location. The home is gut-renovated providing an abundance of natural light while maintaining the warmth of the past. Home offers high ceilings, new maple floors, custom-made cabinets, 2 gas HVAC systems, on-demand hot water, a new roof, windows, fireplace, insulation, etc. The living area offers the flexibility of use with its open design and elegant fireplace. There is a 9-foot kitchen counter. for informal dining. The home offers 3 suites and a private office/nursery. The grand master suite on the second level has an office, walk-in closet, oversized shower, and private deck. The upper level has cathedral ceilings and skylights and a separate office/nursery. This unit has a front yard. deck and a private rear patio. A space in the carport is available for $42,500 (for total of 4 spaces). One EV plug is included with parking. Masks required at Open Houses. Shoes must be removed 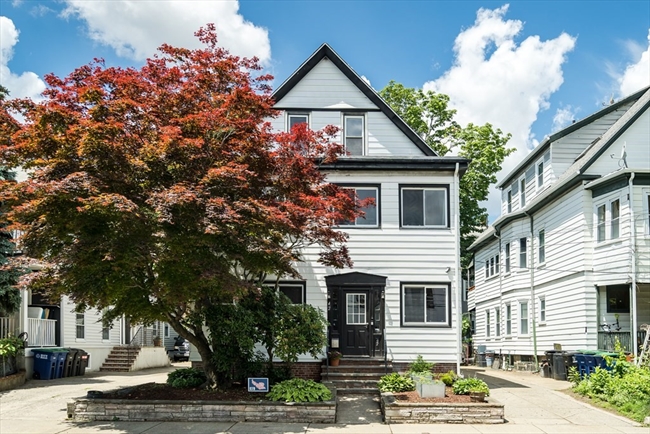 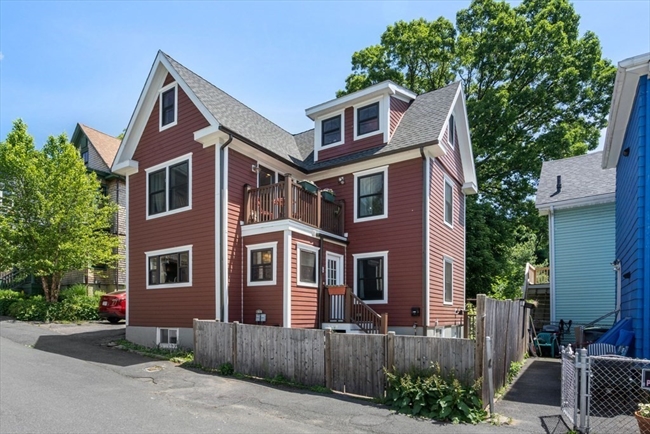 Fantastic single family in coveted Spring Hill neighborhood! Fully-renovated in 2016, this home offers flexible living space on four levels, with many great options for a home office or two, gym, playroom, etc. plus a fantastic courtyard for urban gardening, grilling or coffee al fresco! Special features of this home include a stylish kitchen with breakfast bar open to the living room, primary bedroom with balcony and en suite bath, finished lower level bonus space with full bath and kitchenette, accessible from the interior or its own exterior door, not to mention parking for two cars! (Hersey is a private way where residents *by custom* have the street parking spaces in front of their homes.) Located on a residential side street just blocks from vibrant Union Square with its cafes, shops, farmers market and community festivals. Under a mile to the new Union Square Green Line station, and soon to be just a half mile to the future Gilman Square Station and Minuteman Path extension. 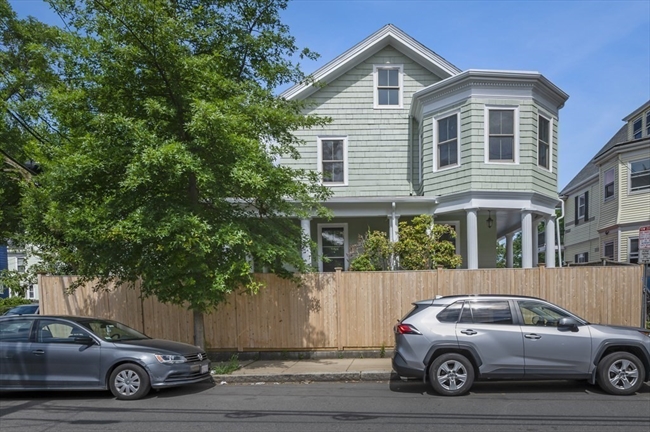 RARE FIND - LUXURY GUT RENOVATED single family This modern, 3bed/3bath home has been completely renovated offering every imaginable convenience. Sophisticated kitchen with shaker cabinets, black SS appliances, quartz countertops, and a waterfall island - perfect entertaining! Stunning electric fireplace invites you through the integrated dining and living areas creating a cozy atmosphere. Don’t miss the 1st floor bonus room/Office with the first floor laundry area - endless possibilities with this additional space! On the second floor you will find the master bedroom ensuite along with two additional bedrooms. Amenities include NEW central heat and AC, private new paved driveway with 4 car parking spaces, lots of storage, and so much more. Prepare to be impressed with the private patio and pergola where hosting summer celebrations are a must! Commuters take note of the close proximity to route 93, the orange line and Assembly Row. New paved driveway and backyard before closing!

Listed by Joe Ravida of Compass 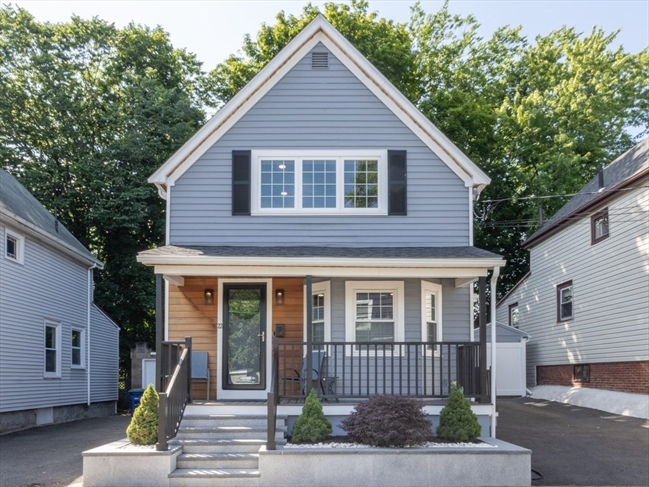 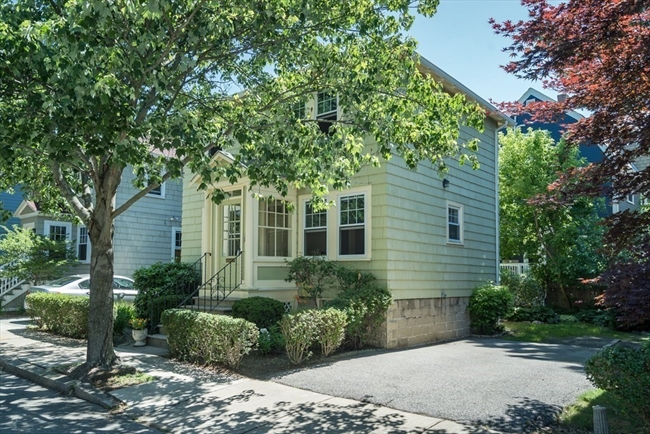 Location,location,location!! Rare opportunity to find a single family home .6 mile to Davis & Teele Square, .2 mile to Hodgkins-Curtin Park & playground, nearby Rt 2. This home exudes pride of ownership. Lovingly maintained and thoughtfully expanded, this home is move in ready! Spacious Living Room and sitting area with coat closet. The expanded kitchen offers a wonderful work area and ample sized dining area with multiple windows providing natural light overlooking private yard. There is a full bath with oversized walk in shower. The second level has 3 BR's & additional bath with clawfoot tub/shower. The basement was expanded with a poured concrete foundation under the kitchen addition, this provides a perfect spot for the workbench. Hardwood flooring throughout, Natural Gas for heat (Peerless Furnace 2005), hot water (40 gal 2022), under cabinet lighting in kitchen and more. Private off street parking for 2 cars plus a garden to putter in. This is the one you've been waiting for!!